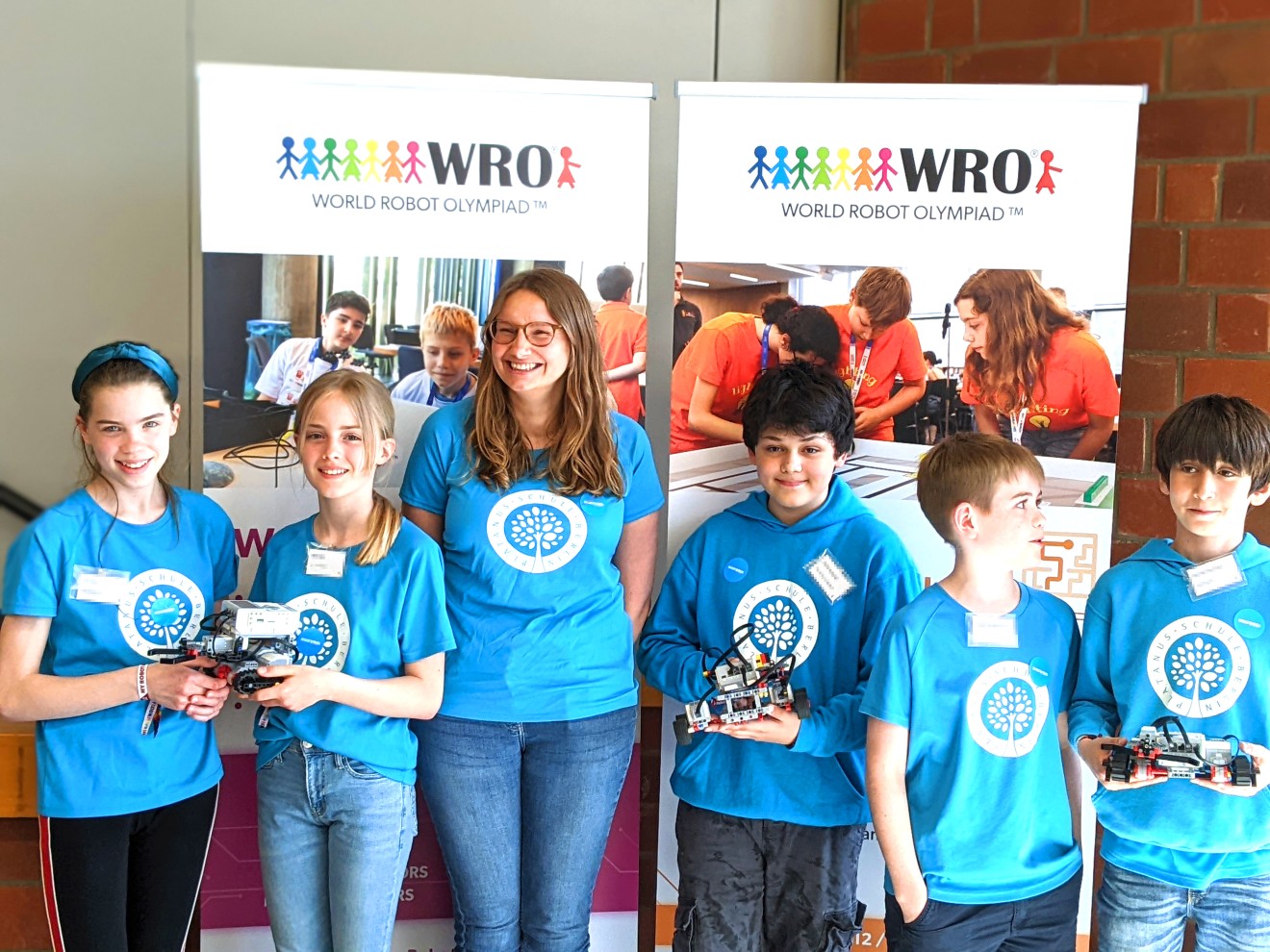 Our school participated in the World Robot Olympiad for the first time. The most talented students from our Year 5 and 6 Robotics elective course came together and competed under the guidance of our wonderful NaWi and Robotics teacher Ms. Barry. Here is a detailed report of their experience:

At 9 am we arrived at the Bildungs- und Forschungszentrum Berlin e.V., Georg-Schlesinger-Schule with about 10 other teams spread across the different categories.

During the welcome speech we got the surprise challenge – cut down a lego tree for an extra 20 points! With that the competition began, and two hours of building and programming time followed. Our three teams set to it – the Victus crusaders from 6a and 6b the Opferratten from 5b and the Double decker from 6a. Soon the time was over, and it was time for the first judging round. Both Opferratten and Double decker managed to get over 50 points on their first attempt, but sadly the Victus crusaders were still having some problems with their caterpillar tracks and sat the round out. One more hour of practice and we reach round two – this time, lightning fast, the Opferratten jumped ahead earning 54 points, whilst Double decker kept up, earning a respectable 47!

After a bit of lunch and a much needed visit from Ms Leong, Ms Kappes and Dr Stahl, who brought sweets and words of encouragement, we had our final two judging rounds. We were especially pleased that parents, grandparents, siblings and friends of our competitors were there to cheer on our three Platanus teams.

Round three was neck and neck for Opferratten and Double decker – both receiving their highest score of 61, and the Victus crusaders were up and moving and claimed 22 points for the round!

All was to play for in the final judging round – the Victus crusaders pulled off a fantastic return gaining their highest score of 40 points! Still neck and neck for the final, the Opferratten team managed to repeat their second highest score of 59 and with that a total of 120, qualified for the Deutschland finale in September and took home the trophy! Double decker, with a total of 115, and the only all girls team across the whole competition, came in second , whilst the Victus crusaders ended in third place.

Here are all the results and times from this year’s World Robot Olympiad and it’s amazing how close the two best teams were: https://www.worldrobotolympiad.de/saison-2022/wettbewerb-ergebnisse/325/berlin-robomission. We are incredibly proud of our students that they immediately took first place in Berlin the first time. Please keep up the enthusiasm and passion, because the next step is the German final in Chemnitz in September.

All in all, it was a great day and a first for our Robotics elective to participate in such an event. We would like to thank our enthusiastic Ms Barry for organising the event, our dedicated head of school Ms Kappes for her continuous efforts to get our students excited about STEM topics and last but not least our ladies and gentlemen at the ‘Platanus & Friends’ for sponsoring our participation.

On a rainy morning in Chemnitz, 103 teams from all over Germany, along with a team of coaches, supporters and robotics equipment, arrived at the Kraftverkehr exhibition centre to battle it out in the WRO Germany final! Amongst them were two students from Platanus Berlin – 6th graders, Ahmad and Jasper – representing our school at the competition for the first time in the history of our school robotics programme.
The day began with organisation – greetings from the minister of Sachsen and the mayor of Chemnitz, welcoming us to the Kulturhauptstadt 2025. Although grey outside, the mood inside was excited, as we learnt about the surprise challenge for the day. A short check of equipment followed and then the first “building phase” began. Jasper and Ahmed (team Platanus) had 120 minutes to build a robot, and then program it to solve challenges on an ever changing board. They were off to a flying start but had some trouble with the sensors, so it was back to the drawing board. Coaches have to stand behind a barrier so as to not speak with the teams, so Jasper and Ahmad had to problem solve completely by themselves. Two hours went flying by and so came the first of the four scoring rounds.

After lunch (königsberger klopse that got a hearty thumbs up from the boys) it was time to try again. By now, the supporting teams of Ahmads and Jaspers families had arrived at the hall, ready to cheer on the boys for the second building phase (90 minutes) and the second scoring round.

During this time, we also had some time to explore the other events in the hall – not only were four robotics competitions taking place simultaneously, but many firms from Chemnitz and the surroundings (particularly those who work with Robotics) were there to show off some really exciting technology. As well as taking home lots of free pens, we got to watch a 3D printer in action, sit in the self-driving bus of the future, and answer electricity quiz questions to win a balloon. All too soon, time was up for the boys and they had their second attempt.

Second attempt – 20 points (the robot knocked over a fence, meaning that 2 points were taken off the total score!)

Day one ended on a frustrating note – the robot just wasn’t quite following the path correctly, so it was back to the drawing board for Ahmad and Jasper. Luckily a relaxing evening meant they could rest ready for day two!
Though still raining, we were feeling hopeful on Sunday morning. Team Platanus had devised a new plan overnight and knew exactly how to put it in motion. The morning started with a new surprise challenge too – 20 bonus points for bringing one piece on the board to a certain corner. Although they had planned something safe, the boys, thinking on their feet, decided to risk it – now the difficulty was in the programming. One hour of building and practice until attempt three, and finally luck was on our side.

Attempt 3 – 29 points. The robot delicate knocked a piece over worth 7 points, which got them a big cheer from me.

Building on this success, they now had 30 minutes to change their robot and programming for the last time. The Platanus supporters arrived (after a morning tour of Chemnitz organised by the WRO), ready to cheer on as loud as they could. Thy boys did a quick probability calculation – hoping that the bonus piece will be in the right place for them to get the extra points.
They were planning and adapting right until the very last 10 seconds before the whistle blew for the final time.
The moment of truth…. The board changed randomly, and the bonus piece was on the other side! Despite the fantastic program they had built, the robot couldn’t get there, but they finished the final round with a still respectable score of 22 points.

The best two points were added together, giving Team Platanus (also known by the excellently creative team name “opferratte”) a total score of 51.

Alas, not a high enough score to get into the top three finalists and secure a place in the world finale (taking place this year in Dortmund), but enough for us to celebrate!

Everything that Jasper and Ahmad achieved this weekend, came entirely from them. In robotics WP at Platanus, the emphasis is on facilitating the learning – not teaching explicitly but lettering the students figure it out for themselves. I can proudly say that they are probably one of the only teams there that knew far more about robotics than their coach does!

The weekend was fantastic – we learnt a lot, made a lot of noise, and met some people from all over Germany with a passion for MINT! It wouldn’t have been anywhere near as good without the support of both Ahmads and Jaspers parents and siblings, who came all the way to support and cheer, and wear their Platanus blue. Of course, we must also thank the Förderverein (Platanus and Friends association). They paid for the training materials, hotel, entry fees and transport to make this opportunity possible for the students and I cannot express my appreciation enough for all the work they do.

Platanus robotics club will be back next year, with even more teams, ready for an even bigger competition – as we said this year, this was the practice for next year…. Because next year the world final is in Panama! 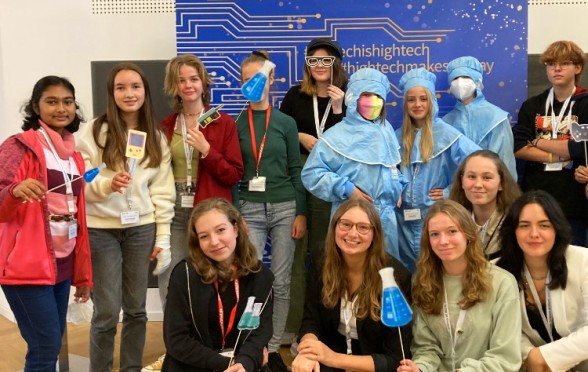 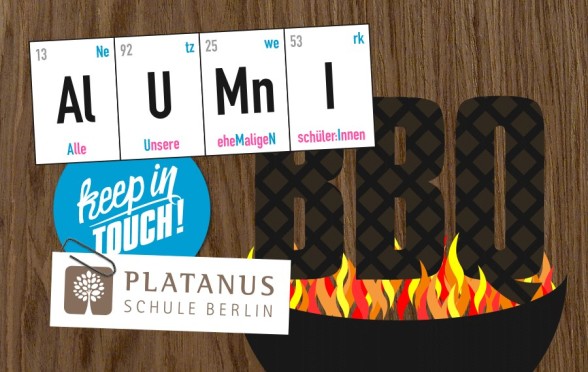 We are happy and proud that we can now call ourselves a "German Chess School". We … END_OF_DOCUMENT_TOKEN_TO_BE_REPLACED

After a break of 2 years, we were more than happy to finally be able to celebrate our… END_OF_DOCUMENT_TOKEN_TO_BE_REPLACED 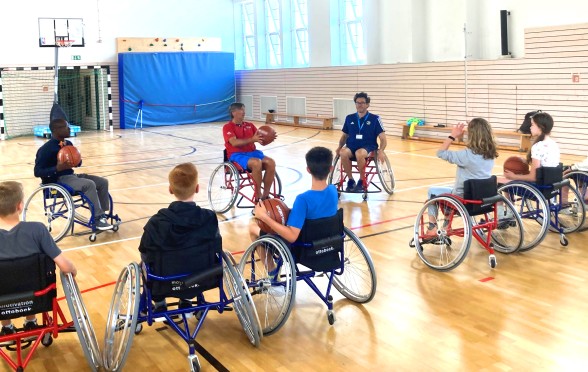 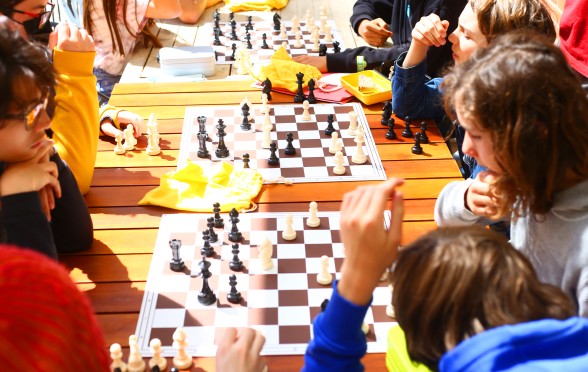